Nowadays Hasselt can also be called a waterside city. This town in Belgium realised a project called Quartier Bleu. A big scale project which entails residences, apartments, town houses, retail- and catering businesses including an underground parking with room for 2.350 cars next to the river.

The entrance to the parking has acquired a very tasteful allure as seen by no other by using solid wood.

The architecture is very contemporary. There are three different ambiances to be discovered in the shopping boulevard, the quay and the city corner. The components of the building consist of beige-grey natural stone, red brick work, concrete and several details of solid wood.

The architects at Creneau International made part of the interior design which include the restaurants and ‘the Connector’ which is the adjacent space between the underground parking and the shops and restaurants.

The most unusual material which Creneau uses is by far solid wood. Creneau explains: ‘the wood gives a marvellous effect. Other eyecatchers are the ceiling domes wich mimic natural daylight. These give the Connector an outerworld feeling.

The domes in this space are integrated in a 1.100 m2 solid wooden Derako grill ceiling in European Pine. The project came together nicely in close colaboration with our sales partner in Belgium. 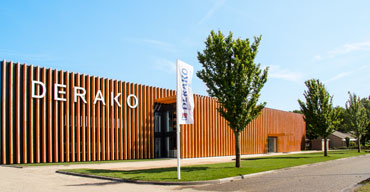