Each EU state has its own regulations with which building materials must comply. A distinction is made in this respect between construction materials and building elements such as facings and finishing materials.

The construction materials (dividing and or supporting walls and or ceilings), in the case of a fully developed fire, must keep the fire within the given compartment. This is called fire resistance and is measured in minutes.

For the building materials used as (decorative) finishings, such as suspended ceilings and wooden panelling used 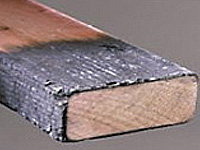 inside the fire compartments (fire escapes and rooms and areas occupied by people), other regulations apply. These regulations concern the flammability behaviour, fire spread over a given surface and the level of smoke production. This is called fire retardance and is expressed on a fire classification scale.

The Derako® massive wooden systems are classed as facings and finishing materials, which means that our products have to meet the fire retardance criteria.

The timber used by Derako can be impregnated. After the impregnation process, the timber is dried. 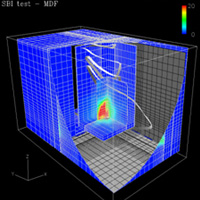 Materials that belong to the product group ‘facing and finishing materials’ have to be supplied with a CE mark and meet the European norm N13964. In order to iron out differences at the national level, E.U. regulators decided in 2003 to standardise all fire tests and bring them under a single set of European regulations. This has led to the introduction of the EN 13501-1 fire test, also known as the SBI test.

Various types of wood used in the Derako® system have all been tested according to the EN 13-501-1 norm (SBI test) and have a classification of B, s2 d0.

International construction regulations set standards that building materials must meet in order to limit the chance of a fire starting and of one spreading quickly: All people present need sufficient time to leave the building.